My brand new book "Illicit Canvas" is live on amazon and other retailers. You can download the book here: 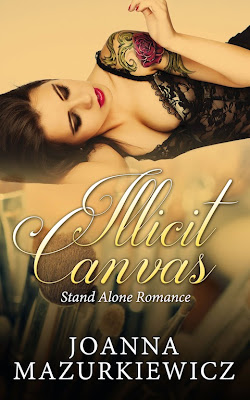 Illicit Canvas (political romance and stand alone romance) Twenty year old Arwen West thinks that she has everything figured out. She moved to Brussels to study art and to find her father, who abandoned her when she was only a child. The only lead that she has is an old painting that her father carried with him many years ago, the painting that was allegedly stolen. She starts to visit galleries, hoping to find someone who can help her with locating that last lost piece of art, but instead runs into Ethan. Older and enigmatic, Ethan elicits raw emotions in her, something that she has never experienced with her current boyfriend, Colin. The instant connection is undeniable, and when Ethan offers to be her guide, she is torn between her own desires and the need to gain closure on her jaded past. Ethan opens her eyes to a new world of eccentric art dealers and old art studios, promising the most illicit affair that she’d ever live through. Every affair has its consequences and if exposed, Arwen might not only destroy Ethan’s political career, but also jeopardise his aspirations forever. Illicit Canvas is a stand-alone romance with intensive, political undertones that entwine art, sexual encounters and suicide.
Posted by Unknown at 04:32